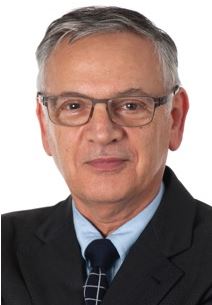 Through-out his career, George has continually been involved in public hospital dermatology, research and academic medicine as well as a private practice.

He is presently Head of Dermatology at the Royal Melbourne Hospital (since 1984) and was also Head at the Royal Children’s Hospital from 1987 to 2012. He has been involved with health care delivery, administration, risk management and quality initiatives, as well as embracing the changes in medical practice in the public hospitals of Victoria. His interest in eczema changed the way care is delivered to eczema in children and established the first Australian Nurse Practitioner model in dermatology for eczema, and instigated the RCH eczema workshops with nurse led education clinics.

At the Royal Melbourne Hospital, the Dermatology Department Professor Varigos and his team have the largest cohort of psoriasis patients on biologics in Australia and he has served as principal investigator in 5 clinical phase three trials with biologics in psoriasis.

George’s research interests range from basic science to clinical research. His PhD was on bullous pemphigoid, and was an original study demonstrating an eosinophil growth factor was involved. Since this time he has maintained a strong interest in immunological skin diseases, including psoriasis eczema lupus and pemphigus pemphigoid, and as well porphyria and epidermolysis bullosa. During a 2001 sabbatical George worked in London and at the Peter MacCallum Cancer Centre where he was in the stem cell epithelial laboratory. He has worked at Walter and Eliza Hall for his PhD and he continues a interest at WEHI as well in the University of Melbourne immunology department.

George has supervised endless research projects, including supervised Masters students, science graduates, MDs, PhDs, AMS students (BMedSci), and Dermatology Fellows. Recent research interests include cytokines in atopic disease, the effect of a low GI diet on eczema, digitalized dermoscopic tools for moles and melanoma, hair follicle immunology, vitamin D, the psychology of itch in eczema, coeliac disease and psoriasis, and the use of alpha MSH analogs in patients with EPP.